The President of Palestine, Mahmoud Abbas, recently visited Spain. His visit took place two weeks after the State visit of Reuven Rivlin, President of Israel, who was offered a clearly different level of protocol. Despite being well within its power, the Spanish Government decided against rising the level of Mahmoud Abbas’s visit and programming a visit to Madrid Town Hall, where he was to have been presented with a special honorary award. For this reason, Pablo Bustinduy, Foreign Affairs spokesperson for Unidos Podemos – En Comú Podem – En Marea, has sent a letter to the Foreign Affairs Minister and tabled a parliamentary question to the Government on, among other related issues, the reasons for the different level of protocol offered to the Israeli and Palestinian Presidents.

From Podemos, we welcome President Abbas by demanding once more that the Government enforce and comply with International Law. There is no justification for its failure to recognise the Palestinian State, unilaterally and without any further delay, as demanded by our parliamentary group in the previous parliamentary term. On November 18th 2014, the Spanish Parliament unanimously approved a motion urging the Government to recognise Palestine as a state, adding that this recognition should be the result of a process of negotiation between Israelis and Palestinians under the auspices of the European Union. So far, 135 countries have formally done so, including several of our European partners, such as Poland, Czech Republic, Hungary, Romania, Malta, Cyprus, and Sweden.

If our country wants to make a contribution to peace, justice, and international law in the Middle East, it should stop seeking to reach an agreement with countries which fail to uphold them, such as Israel. The Government, which in coordination with other countries supported the December 23rd 2016 UN Resolution 2334 against the settlements, needs to be coherent and must, once and for all, stop talking and start acting, demanding that Israel respects Human Rights and ends the occupation, the siege of Gaza, the policies of apartheid, and the violation of the rights of the Palestinian people.

The Government has a prime opportunity to prove its commitment to international law by joining seven other European countries in demanding compensation from Israel for seizing the premises and materials of two demolished schools in Abu Nuwar and Jubeit Al Dhib, near Jerusalem, last October. If the State of Israel continues to engage in the destruction of Spanish and European cooperation projects -such as the ones in Susia (Hebron) and Gaza, or in the marketing of goods made in the illegal settlements; and if it continues to contravene the Convention on the Rights of the Child, the Spanish government and the European Union must enforce compliance with international resolutions and international law, and sanction Israel. 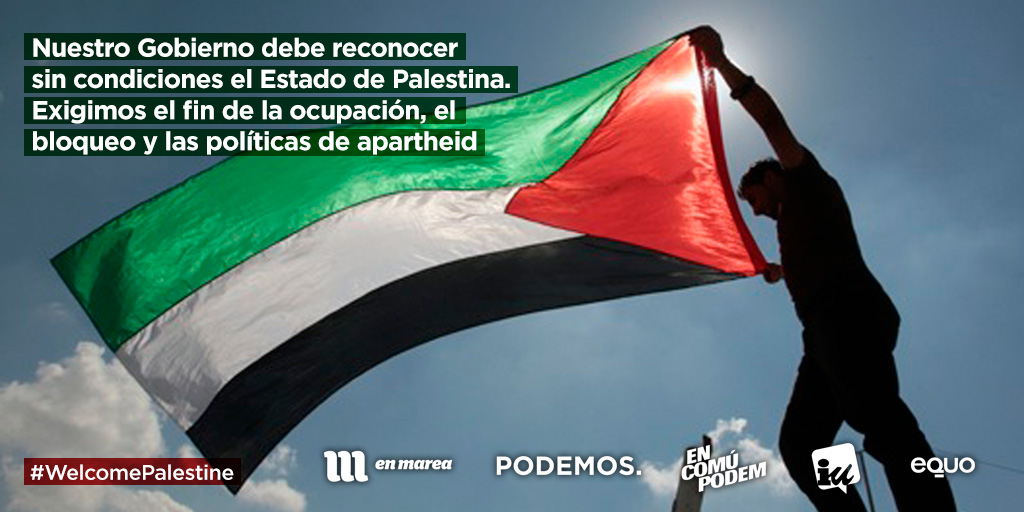